I promise I intend to blog more. Alas, being on the road makes it a bit difficult. Nevertheless, I do apologize.

The third and final leg of this Spring tour is going really well. We spent a weekend at the beautiful Windy Gap YL camp just outside of Asheville, NC. Seriously. So much fun. It was a family camp, so there were folks of all ages hanging out. I really enjoy worshiping with lots of generations. It feels like a big family. I also enjoyed all of the spontaneous hugs I received from little girls. They were so cute. I love how fearless little kids are. Sometimes I really wish I could be like that again.

From Windy Gap we made our way to Greensboro, NC and played a house show for some fun folks. There was a cook out before the show and it was delicious. I love burgers from cookouts. They’re different from the burgers you get a restaurants. And there was cake. Mmmmm….

We spent two days in Greenville, NC hanging out with some young life kids. Can I just say I love young life? It’s so energetic. We sang Party in the USA, and some other popular song that I hadn’t heard. Tyler was shaking his hips like yeah. For reals.

Now we’re in Delaware. It’s so good to be here. It’s familiar. It feels like home. I got my hair cut this morning and I didn’t need to use my gps to get to the salon. It’s the little things.

We’ve got tons of shows lined up here. We’ll be in DE, MD, PA, NYC, and Boston over the next two or so weeks. Check the tour page to see if we’re coming to you!

Well, that’s about it. Just thought I’d give you a little recap of what we’ve been up to!

Hope to see some of you soon.

Hello! It’s been a little while. My apologies for not updating a bit more frequently when we’re on the road. I wanted to get all of our photos in order from the last leg up in IL and OH so that I could share them with you.

Tour was so good. Exhausting, but awesome. We traveled up to Bloomington, IL, Naperville, IL, Chicago, IL, and then over to Columbus, OH before making our way home.

We had the pleasure of staying with one of my college roommates while we were in Bloomington. It’s always nice to see old friends. She was very pregnant while we were there and literally had her baby 2 days after we left! Crazy! A beautiful baby girl. I hope to meet her soon. Unfortunately I didn’t get any pictures in Bloomington other than a few with my friend and I think she’d be a little upset if I posted them for all the world to see…so I won’t.

We had a really good show in Naperville too. While we were in Bloomington and Naperville we had the privilege of opening for Andrew Osenga. If you haven’t heard Andy, you really should. We were able to sit and really listen to Andy’s entire set in Naperville and it was amazing. We left that night wondering why we didn’t know he was amazing before. AND we had Giordano’s pizza after the show. Ummm….I’m sure there are 1000 calories per slice….but it was some of the best pizza I’ve ever had. Mmm. A few photos from Naperville:

Getting a little sweaty... 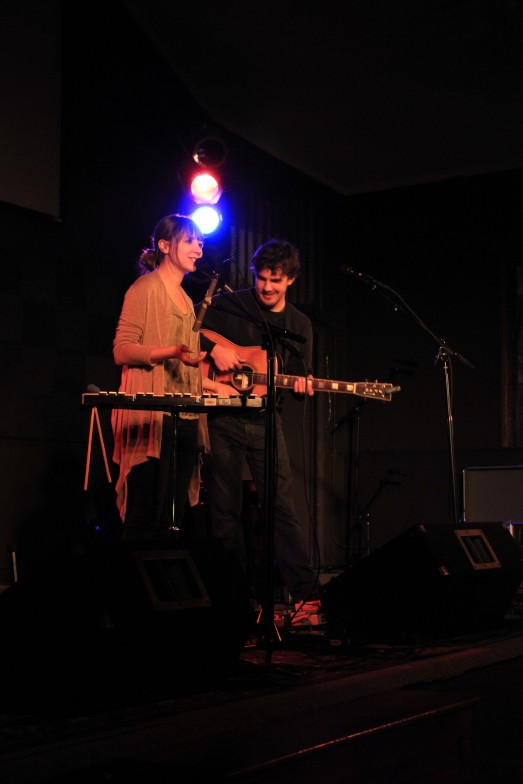 The next morning we headed for Chicago. It was a beautiful day. We made a little stop at a park along Lake Michigan:

Then we headed over to a coffee shop and did some work before making our way to the house show. Here are some photos from the show. All of these were taken by the talented Rebecca Christian.

We hit the road bright and early the next morning for Columbus, OH. We played at the Iuka House. The girls here now how to put on a house show. It was a blast. The next morning they even made us a big breakfast with chocolate chip pancakes, strawberries, and bacon. And the food the night before was from a Middle Eastern restaurant. Hummus, pita, rice, spicy chicken, cashew rolls, and so much more. Delicious. Photos from the evening. I believe most of these were taken by Rachel Joy Baransi. 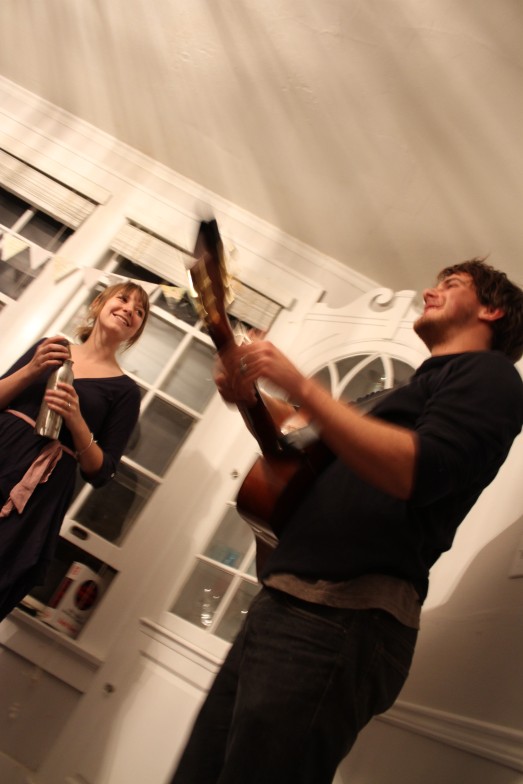 All in all, a wonderful little run. We’re headed for MS State in Starkville, MS on Tuesday, and next Friday we kick off our big east coast run. Check the tour page to see if we’re coming near you!

I made a new best friend at the show in Bloomington the other night.

For some reason this little girl picked me to be her best friend and confidante for the night. Maybe she recognized me from the stage. Maybe she thought I looked friendly. She came over and talked to me for a few minutes and then walked away. I thought she’d just gone off to find someone else but then she came back dragging a huge chair behind her. She set the chair next to me and climbed up.

We had a pretty awesome conversation. A few highlights:

Little Girl (LG): So what are you hoping for?

Me: What do you mean?

LG: One of each? Because that’s what I’m hoping for.

I realize she’s talking about kids.

Me: Oh sure, yeah one of each.

LG: I’m going to name my daughter Elizabeth and my son Jackson. I’m naming him Jackson because there’s a boy in my class named Jackson and I really want to marry him.

Me: So you’ve already found the guy?

LG: My mom had to get surgery on her butt because she broke it or something.

I almost laughed out loud.

She also told me that she is a huge Andy Osenga fan (we opened for Andy that night) and that she has all of his CDs on her ipod. It was adorable.

There was so much more. So funny.